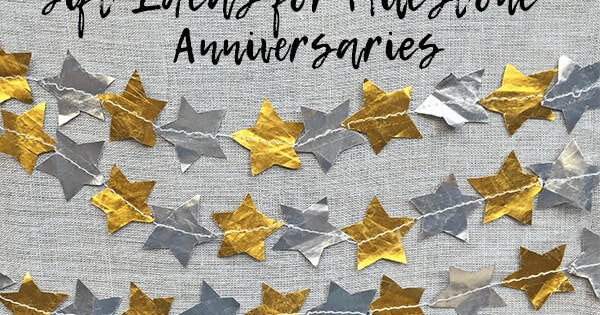 Whether you're celebrating your first or 50th anniversary together, the question of what to give your one-and-only perplexes most. And no doubt you're aware there are traditional guidelines for wedding anniversary gifts (much like anything related to weddings!). We love a blueprint for gift shopping, but we also like to think of gifts that are off someone's radar (but simply fantastic!). That's why we enlisted the help of Nancy Laboz, creator and proprietress of Parcel, which is a one-of-a-kind shop focused on unexpected gifts, unique paper goods, and vintage collections. Here, Nancy shares her expert tips on scouting the best anniversary gifts for your love.

Q: What do you find meaningful about these traditional symbols (cotton, wood, paper, etc.) used to mark anniversaries and guide shopping for an anniversary gift?

Nancy: These traditional icons can be a jumping-off point for a very creative idea. It's not always about the most expensive and prestigious gift, but moreso the most thoughtful and symbolic. And playing upon the symbol — by adding your own twist — makes for a more memorable and interesting gift-giving experience. Many of these ideas can be morphed into multiple anniversaries. For example, it's always wonderful to document memories in a lovely book or having dinner under the stars is something you'd love anytime!

Without further adieu, follow this guide to traditional and out-of-box anniversary ideas by year!

1st Anniversary: The traditional material for celebrating your first anniversary is paper. It's easy to think on traditional gift ideas for this one. You could give your wedding vows printed on paper, a love book, a special art print, or monogrammed stationery.

Out-of-Box Idea: Celebrate with your love under the stars (paper stars, that is.) Festoon paper-stitched star garlands overhead indoors, or in your outdoor space, to create a magical and romantic starry sky (see image).

2nd Anniversary: Cotton is the key material for celebrating a second wedding anniversary. You could give a cotton pillow or sham (with a message) or a more traditional set of luxe cotton bath towels or sheets.

Out-of-Box Idea: Give matching vintage-style cotton nightshirts or personalized bathrobes. For a romantic twist, add your "love" nicknames as a special monogram.

3rd Anniversary: Leather is the main inspiration for a third wedding anniversary. Think of a stylish leather bag or chair that your spouse has been coveting — or a leather wallet (with a love note slipped inside).

Out-of-Box Ideas: You could give a hand-tooled leather journal for documenting memories from your first three years of marriage (see image). Or give your love the wished-for iPad inside a cool leather case.

4th Anniversary: For a natural twist, fruit and flowers make the traditional material for celebrating a 4th wedding anniversary. As you may guess, that could include flowers in a pretty vase or centerpiece. Other classic ideas include fruit delivered on a monthly basis or pressed flowers in a pretty necklace.

Out-of-Box idea: Give your sweetheart a beautiful bottle of wine. Even better, plan a trip to a local vineyard. Because time together is the best gift, for any year.

5th Anniversary: Wood is where it's at for a 5th anniversary. The traditional ideas include a wood frame, wooden keepsake, wood jewelry (like a wooden ring) — or even a personalized wooden jewelry box. (Extra points if you include a new gem inside.)

Out-of-Box Ideas: You could give a wooden game board (the couple who plays together, stays together.) Or put together a wood-scented candle in a vintage wood cigar box (see image).

10th Anniversary: For the big 10th anniversary, the traditional material is tin. Tea tins, a tin of good food, and even tin jewelry are common gift ideas.

15th Anniversary: Crystal is the sparkly material used for celebrating the big 15th anniversary. For traditional gift ideas, anything made of crystal (vase, glassware, jewelry) comes to mind.

Out-of-Box idea: Consider booking a trip to a geologically rich destination! From the Crater of Diamonds State Park to the diamond mines in Herkimer, NY. Good news: you can keep any gems you find.

20th Anniversary: Your 20th anniversary is a big deal, and it's considered your platinum anniversary. Think jewelry set in platinum as a traditional gift pick.

Out-Of-Box Idea: Give a personalized and framed platinum-plated record as unexpected way to celebrate 20 years together.

25th Anniversary: When you've been in marital bliss for a whopping 25 years, it's considered your silver anniversary. With this traditional material, you'll find many options in jewelry or engraved keepsakes.

Out-of-Box Idea: Go for a gift that's less expected and give your sweetie silver foil-pressed monogram stationery or silver charms that feel meaningful.

50th Anniversary: Celebrating a 50th anniversary is a golden moment. That's why gold is the traditional material for this brilliant milestone. Gold jewelry or a golden photo album is a solid choice.

Out-of-Box Ideas: Give something gold, like a love message or poem written in gold calligraphy (you can commission an artist to do the writing!). Or give his-and-hers metal gold leaf crowns — because you deserve a crowning moment.